Nanoparticles are great additives to the flame retardant and thermal properties of the polymers, however, they generally have some disadvantages on the mechanical properties. The mixing of polymers and nano-fillers such as Cloisite clays, melamine polyphosphate, molybdenum disulfide and graphene are mostly physical reactions between them and do not have chemical reactions during blending. And well dispersion is necessary to increase the conductive pathways, meanwhile, to reduce the loss of mechanical properties. Some of them are used for enhancing the self-extinguishment of PLA, which can form charring layer covered on the surface of samples to hinder the burning process. Generally, the better the nano-fillers disperse in the polymer matrix, the easier the material will intumesce and form charring layer during combustion, and on the other hand, the lower loss of mechanical properties the composite has. Besides, graphene is always applied to improve the thermal conductivity of polymers because of its excellent thermal conductivity. And the mechanism of how to enhance this physical property has been discovered in the whole research. In this study, we focused on the most popular polymers like polypropylene (PP), polystyrene (PS), polylactic acid (PLA) and poly (methyl methacrylate) (PMMA). And the nanoparticles we used are Closites clays, melamine polyphosphate (MPP), molybdenum disulfide (MoS2), graphene (GNPs), Ce-RDP and C-RDP. The last two particles were general additives cellulose and Closites clay sodium coated by RDP, respectively. We successfully obtained some blending materials which have excellent flame retardancy, however, the mechanical properties like impact and tensile had reduced more or less tested by Izod impact tests and tensile testing. In this paper, we also determined that graphene played an important role in improving the thermal conductivity of PP, PS and their immiscible blending with other polymers. And there were many factors like the degree of crystallinity of polymer matrices, the similarity of polarization between graphene and polymers, the mixing time and temperature, affect the rate of thermal conductivity enhancement to some extent. 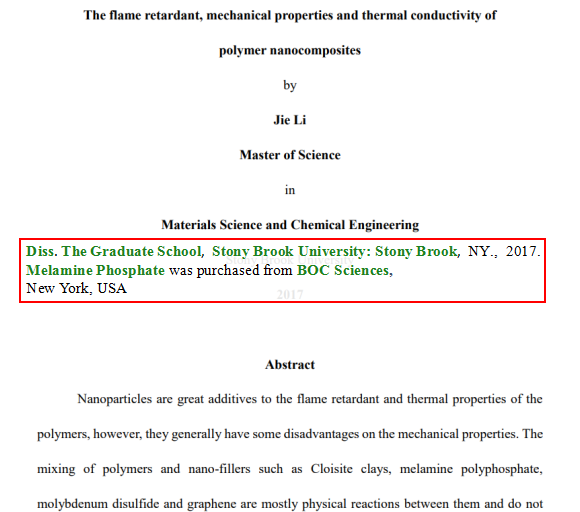 Products Used in this Publication