A faropenem, linezolid, and moxifloxacin regimen for both drug-susceptible and multidrug-resistant tuberculosis in children: FLAME path on the Milky Way

The regimen of linezolid and moxifloxacin was found to be efficacious in the hollow fiber system model of pediatric intracellular tuberculosis. However, its kill rate was slower than the standard 3-drug regimen of isoniazid, rifampin, and pyrazinamide. We wanted to examine the effect of adding a third oral agent, faropenem, to this dual combination.

We performed a series of studies in the hollow fiber system model of intracellular Mycobacterium tuberculosis, by mimicking pediatric pharmacokinetics of each antibiotic. First, we varied the percentage of time that faropenem persisted above minimum inhibitory concentration (TMIC) on the moxifloxacin-linezolid regimen. After choosing the best faropenem exposure, we performed experiments in which we varied the moxifloxacin and linezolid doses in the triple regimen. Finally, we performed longer-duration therapy validation experiments. Bacterial burden was quantified using both colony-forming units per milliliter (CFU/mL) and time to positivity (TTP). Kill slopes were modeled using exponential regression.

TTP was a more sensitive measure of bacterial burden than CFU/mL. A faropenem TMIC > 62% was associated with steepest microbial kill slope. Regimens of standard linezolid and moxifloxacin plus faropenem TMIC > 60%, as well as higher-dose moxifloxacin, achieved slopes equivalent to those of the standard regimen based by both TTP and CFU/mL over 28 days of treatment.

We have developed an oral faropenem-linezolid-moxifloxacin (FLAME) regimen that is free of first-line drugs. The regimen could be effective against both multidrug-resistant and drug-susceptible tuberculosis in children. 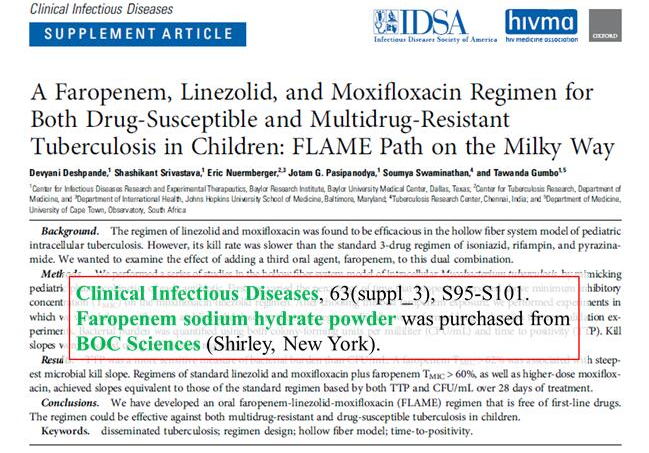