Strictures develop in >30% of patients affected with Crohn's disease. No available medication prevents stricture development in susceptible patients. In Crohn's strictures, but not adjacent normal intestine, TGF-β1 increases in muscularis smooth muscle, increasing collagen I production and strictures. Muscle cells express αVβ3 integrin containing an Arg-Gly-Asp (RGD) binding domain. The aim was to determine whether increased TGF-β1 levels in strictures were the result of latent TGF-β1, which contains an RGD sequence, binding to and activation by αVβ3; and whether cilengitide, which is an RGD-containing αVβ3 integrin inhibitor, decreases TGF-β1 activation and development of fibrosis in chronic 2,4,6 trinitrobenzene sulfonic acid (TNBS)-induced colitis.

Muscle cells isolated from Crohn's disease strictures and normal resection margin and from the colon of rats after 42 days of chronic TNBS-induced colitis were used to prepare RNA and protein lysates and to initiate primary cultures. The mechanisms leading to increased TGF-β1 activation, collagen I production, and fibrosis were examined in human muscle and in rats. Human cultured cells in vitro and rats in vivo were treated with cilengitide to determines it efficacy to decrease TGF-β1-activation, collagen production, and decrease the development of fibrosis.

Latent TGF-β1 is activated by the αVβ3 RGD domain in human and rat intestinal smooth muscles. Increased activation of TGF-β1 in Crohn's disease and in TNBS-induced colitis causes increased collagen production, and fibrosis that could be inhibited by cilengitide.

Cilengitide, an αVβ3 integrin RGD inhibitor, could be a novel treatment to diminish excess TGF-β1 activation, collagen I production, and development of fibrosis in Crohn's disease. 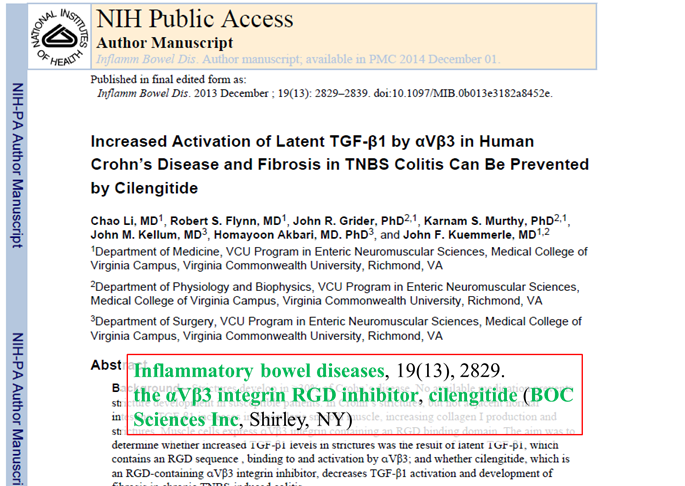