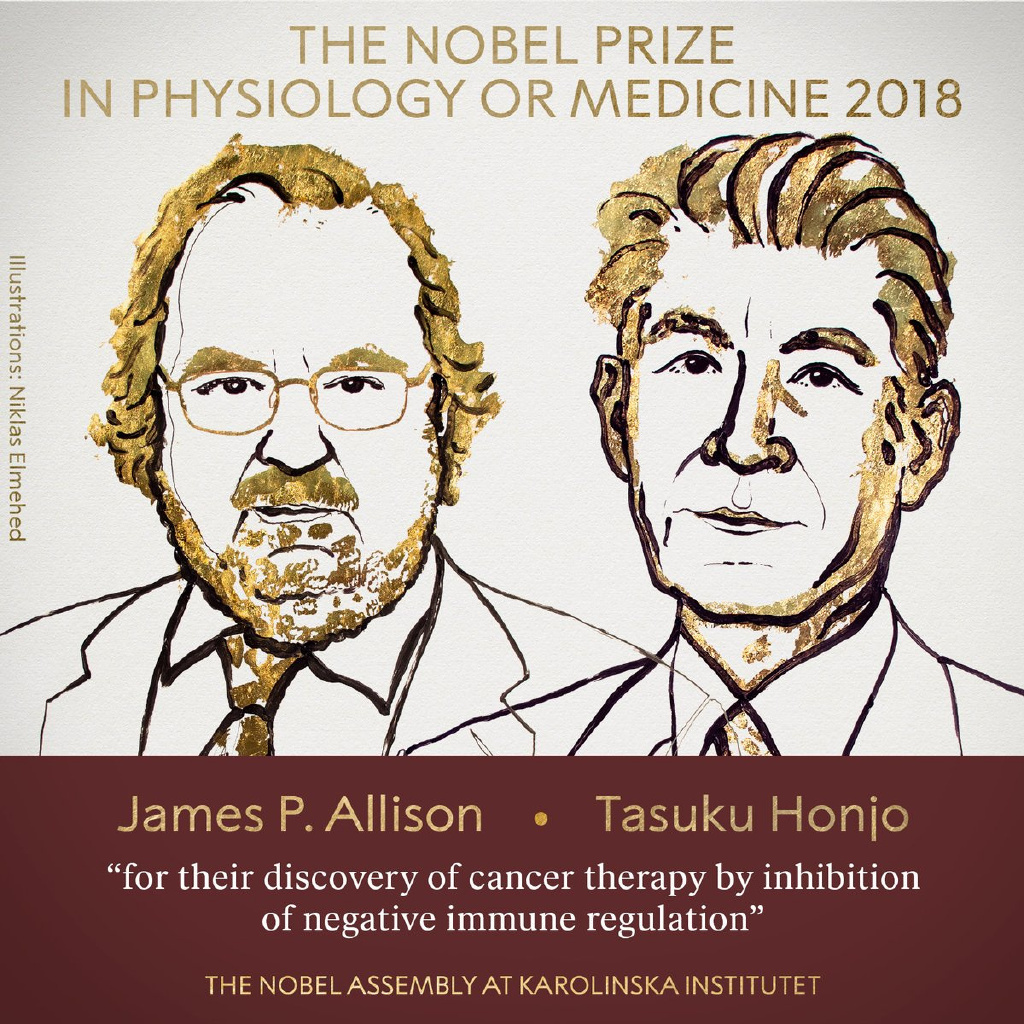 Announcement of the 2018 Nobel Prize in Physiology or Medicine by Professor Thomas Perlmann, Secretary of the Nobel Committee for Physiology or Medicine, on 1 October 2018. It was awarded jointly to James P. Allison and Tasuku Honjo “for their discovery of cancer therapy by inhibition of negative immune regulation.”

In his research, Allison investigated the T-cell protein CTLA-4, which acts as a brake on the immune system. The researcher’s breakthrough came when he recognized that, by easing off the brake, immune responses could be accelerated to target tumors. This idea formed the basis for an entirely new class of cancer treatments: immune checkpoint therapy, including for the treatment of an advanced form of skin cancer. Honjo, meanwhile, identified another immune-cell protein PD-1, which also acts as a brake, but functions differently than the one studied by Allison. Over the following years, Honjo unraveled the role of the protein, while he and other researchers leveraged the findings to develop new and effective treatments for cancer patients.

PD-1 is a member of the B7/CD28 family of costimulatory receptors. It regulates T-cell activation through binding to its ligands, programmed death ligand 1 (PD-L1) and programmed death ligand 2 (PD-L2)，similar to CTLA-4, functions as a T-cell brake, but operates by a different mechanism. PD-1 inhibits effector T-cell activity at later-stage immune responses in peripheral tissues and in the tumor microenvironment. Tasuku Honjo and other group found that PD-1 demonstrate clear efficacy in the treatment of patients with different types of cancer. Results were dramatic, leading to long-term remission and possible cure in several patients with metastatic cancer, a condition that had previously been considered essentially untreatable. Immune checkpoint therapy for cancer today and in the future

Basic and translational studies in the 20 years since CTLA-4 and PD-1’s discovery have demonstrated the concept of immune surveillance in mice and humans. The recovery of T-cell anergy by blocking CTLA-4 and PD-1 signals on T cells yielded incredible clinical benefits for several types of malignancies. At present, a number of clinical trials have been conducted on the combination therapy of CTLA-4 antibody and PD-1 antibody. Recently, BMS has published a large number of clinical data: PD-1 antibody Opdivo combined with CTLA-4 antibody Yervoy first-line clinical data for advanced renal cancer, the effective rate is as high as 41.6% (this clinical trial code CheckMate-214, is a global The center’s large phase III clinical trial).In June.2017, an article in the Science publication Science Translational Medicine used PD-1 and CTLA-4 antibodies to disrupt the “brake mechanism” of immune cells and in combination with chemotherapy, can effectively inhibit the growth of tumors carrying BRCA1 mutations, improve the survival rate of animal models significantly, revealing a combination strategy against malignant breast cancer for the first time.

Therefore, Allison and Honjo encourage people to work together to combine different strategies to release the immune system’s brakes in order to more effectively eliminate tumor cells. A large number of checkpoint treatment trials are currently underway for most types of cancer, and new checkpoint proteins are being tested as targets.

← 2018 Nobel Prize in Chemistry: The Power of Evolution
Clinical trials of the three kinds of cancer →