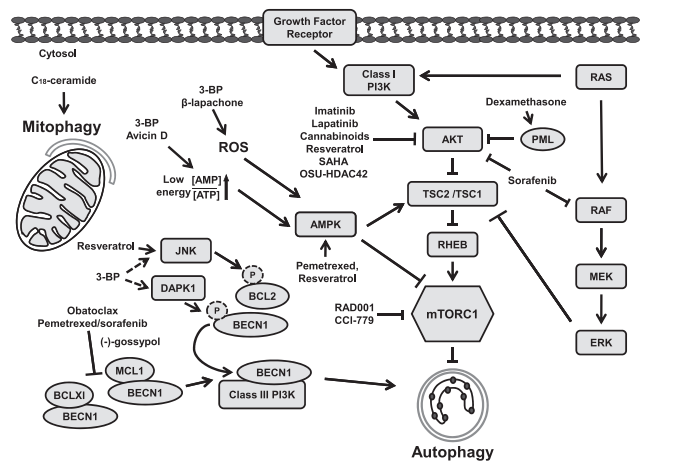 Although the role of autophagy in cancer is very complex, various pharmacological agents with different antineoplastic properties have been shown to induce autophagic activity resulting in massive death of cells in some cancer types. Apoptosis resistance is one of the major causes of chemoresistance, and an important challenge in the treatment of cancer is the development of therapies that overcome chemoresistance. Thus, activation of autophagy in apoptosis-resistant cancers could potentially provide a way to induce cell death and impede malignant growth.

Here, we describe some interesting examples of drugs and drug-like molecules inducing ACD in cancer cells.

The antifolate and antimetabolite pemetrexed is already in clinical use for the treatment of non-small cell lung carcinoma (NSCLC). Pemetrexed interferes with cellular metabolism and leads to elevated 5-aminoimidazole-4-carboxamide-1-b-D-ribofuranosyl monophosphate (ZMP) levels, leading to the activation of AMPK, which in turn inactivates mTORC1. The end result is increased autophagy. Molecular targets of anticancer agents in the autophagy-activating upstream pathways.

Dysregulation or constitutive activation of tyrosine kinases plays a key role in tumor development and progression, making them attractive cancer therapy targets. For example, the tyrosine kinase inhibitor lapatinib was shown to target both ERBB1 and ERBB2 receptor kinases stimulating cancer growth. Epidermal growth factor receptor (EGFR), a member of the ERBB family of tyrosine kinase receptors, was found to be overexpressed in many epithelial cancers. Dysregulation of EGFR contributes to cancer formation and growth through its effects on autonomous cell growth, cell death inhibition, angiogenesis, and tumor spread. Cetuximab was among the first EGFR monoclonal antibodies approved by the FDA for the treatment of solid tumors.

Histone acetylation is controlled by histone acetyl transferases, which transfer acetyl groups to lysine residues, and histone deacetylases (HDACs), which deacetylate them. Inhibitors of HDACs were introduced as potent anticancer drugs. At least two histone deacetylase inhibitors, the  hydroxamic acid-based vorinostat (also known as suberoylanilide hydroxamic acid, SAHA) and romidepsin (FK228), have been approved by the FDA.

Temozolomide (TMZ) is a small lipophilic alkylating agent in use as an anticancer agent for high-grade, aggressive brain tumors and melanoma. The action of TMZ depends on its ability to alkylate DNA, leading to DNA damage and tumor cell death.

Rapamycin, binds to the FK506-binding protein FKBP12 and inhibits the mTOR pathway, the central negative regulator of autophagy. Rapamycin treatment exhibited anticancer properties, and is currently in clinical trials for the treatment of various malignancies.

The ubiquitin proteasome system (UPS) is the main mechanism for the degradation of short-lived proteins in cells. Due to their ability to specifcally induce cell death in transformed cells, proteasome inhibitors were evaluated for their potential in cancer therapy as single agents or in combination with other treatment regimens.

Anti-apoptotic members of the BCL2 protein family function in the suppression of both apoptosis and autophagy, and they are of major importance in the therapy resistance of several cancer types, including malignant gliomas. In an attempt to specifcally target BCL2 proteins, BH3 mimetics were developed as drugs.

Glucocorticoids (GC) have been exploited in the treatment of lymphoid malignancies because of their ability to induce cell cycle arrest and apoptosis. Although they have been in clinical use for a long time, their mode of action and the mechanisms of resistance development during therapy remain unknown.

The vitamin D3 analogue EB1089 was shown to be toxic for various malignant cells, including ovarian cancer and prostate cancer cells.