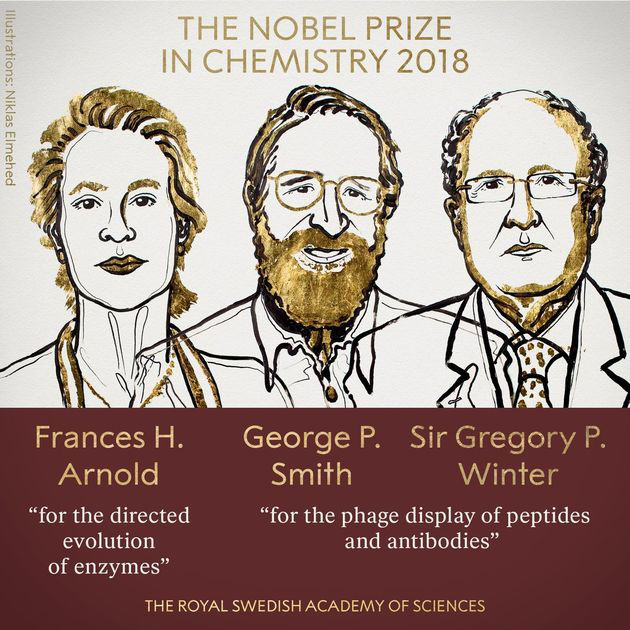 “The said interest shall be divided into five equal parts, which shall be apportioned as follows: /- – -/ one part to the person who shall have made the most important chemical discovery or improvement…”  (Excerpt from the will of Alfred Nobel.)

The Royal Swedish Academy of Sciences has decided to award the Nobel Prize in Chemistry 2018 with one half to Frances H. Arnold “for the directed evolution of enzymes” and the other half jointly to George P. Smith and Sir Gregory P. Winter “for the phage display of peptides and antibodies”.

They harnessed the power of evolution

Inspired by the power of evolution, this year’s Nobel Laureate in Chemistry has used the same principles—genetic variation and selection—to develop proteins that solve human chemistry problems.

Frances H. Arnold first conducted the directed evolution of enzymes (catalytically chemically reactive proteins) in 1993. Arnold induces genetic mutations in biological enzymes and then observes what effect these mutations. She then chooses to confirm the specific mutations which are effective. For example, allowing the enzyme to act in a previously inactive solvent. Her research has made it possible to avoid the use of many toxic catalysts and to drive the research and development of enzymes in various fields, including biofuels and pharmaceutical manufacturing.

In 1985, George P. Smith developed an elegant technique called “phage display” that allowed bacteriophage (a virus that infects bacteria) to be used to evolve new proteins. Sir Gregory P. Winter presents phage for the directed evolution of antibodies with the goal of making new drugs. The first drug based on this method, adalimumab, was approved in 2002 for rheumatoid arthritis, psoriasis and inflammatory bowel disease. Today, phage display antibodies that have been able to neutralize toxins, fight autoimmune diseases, and even treat metastatic cancer.

The basic principle of enzyme directed evolution. After several cycles of directed evolution, an enzyme may have several thousand times the effect. 1. Random mutations are randomly introduced genes, which are eventually altered; 2. These genes are inserted into bacteria, which use them as templates to randomly produce mutant enzymes; 3. The altered enzyme material has been tested, they are very effective in catalyzing the desired chemical reactions. This is a method developed by George Smith to find unknown genes based on known proteins. 1. Smith introduces a gene into the phage capsule, after which the phage DNA is inserted into the bacteriophage-producing bacteria; 2. The peptide produced from the introduced gene can be used as a partial protein capsule on the surface of the phage; 3. Smith can attach to the peptide with one type the antibody on the phage is cleared, and as a reward, he obtains the gene of the peptide. The principle of directed evolution of antibodies displayed using phage. This method is used to produce new drugs. 1. The genetic information of the antibody binding site is inserted into the phage DNA. This can be used to create a library of diverse antibodies; 2. For a selected specific target, a strong adherent phage; 3. Before making another selection, a random mutation will be introduced and attached to the target antibody. 4. With the emergence of a new generation of antibodies, antibodies will attach more strongly to the target protein.

The directed evolution of enzymes has made the chemical industry more environmentally friendly, helping to produce new substances, produce biofuels, and eliminate disease. The phage display technology allows more protein antibodies to be discovered and can be fully applied to the treatment of autoimmune diseases, tumors, and cancer. These two technologies will create well-being and profound change for human society.

← Targeted Drugs for Cervical Cancer
The Nobel Prize in Physiology or Medicine 2018: A Turning Point in the War on Cancer →