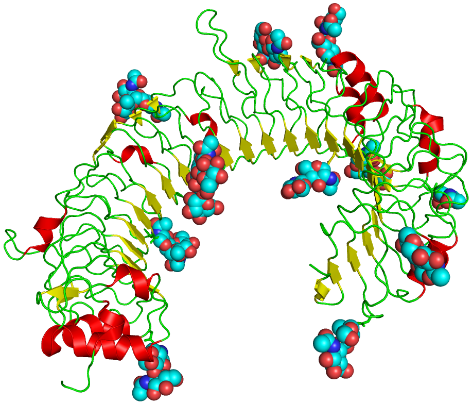 Toll-like receptors (TLRs) are a class of proteins plays an important role in the natural immune system receptor, it was found in the 1990s, a typical pattern recognition receptor (PRR), identifying pathogen-associated molecules pattern (PAMP). TLR and interleukin-1 receptor form a receptor superfamily: Toll-like/Interleukin-1 receptor superfamily (TIR). In terms of structure, TLR belongs to type I transmembrane protein, including bright Extracellular region of the amino acid repeat (recognizing PAMP), transmembrane region and containing the cytoplasmic domain of the TIR domain (mediated downstream signaling). According to their cellular localization, TLRs are mainly divided into two categories: one includes TLR1, TLR2, TLR4, TLR5, TLR6 and TLR11, located on the cell surface, which membrane structures such as proteins, lipids, lipoproteins, etc. and can be activated by small molecules or antibodies; the other contains TLR3, TLR7, TLR8 and TLR9, located in the intracellular vesicle structure (lysosome, endosomal and endoplasmic reticulum, etc.), identifying microbial nucleic acids. TLR mostly functions as a homodimer, however TLR2 form a heterodimer with TLR1 or TLR6, which interacts with different ligands. Some TLRs also require a co-receptor to be perfectly integrated with the ligand. When the TLR is activated by the ligand, some connexin molecules in the cytoplasm are enriched to transmit signals, which is required for most TLRs. There are four of the most connexins studied currently, MyD88, TIRAP (MAL), TRIF and TRAM. Connexin Protein further activates other intracellular molecules (such as IRAK1, IRAK4, TBK1, and IKKi), allowing signals to be amplified and transmitted and ultimately affecting effector genes. TLR is capable of initiating and transmitting multiple cellular signaling pathways involved in infection, inflammation and innate immunity, which is an important target for the prevention and drug development of such diseases. In addition, human genome, in vitro and animal model studies have provided a series of meaning result. This article briefly summarizes the research progress of TLR targeted drugs, with a view to enlighten the follow-up research.

Imiquimod (INN) is the first TLR target drug, which induces the production of IFN-α, IL-6 and TNF-α through TLR7-MyD88 signaling pathway, so as to achieve the purpose of regulating immunity and treating tumors, for a variety of skin swelling. Specific single-stranded RNA molecules often activate both TLR7 and TLR8, acting as an immunomodulator, stimulates dendritic cells and improves the function of regulatory T cells, so it can be used for the treatment of tumors and is more effective when combined with chemotherapy drugs, such as resiquimod (R 848) and 852A. IPH-3201 also has the effect of treating tumors and infectious diseases. The downstream signal of TLR9 can enhance the function of anti-tumor T cells and regulate the function of T helper cells. The natural ligand is unmethylated DNA, and CpG-oligodeoxynucleotide (CpG ODN) which mimics such structure has good anti-tumor potential, such as IMO-2055, has passed safety experiments and showed anti-cancer activity in a mouse model, which is more effective when combined with chemotherapy drugs. MGN-1703 and MGN-1704 contain non-coding double-stranded stem-loop DNA, which can activate TLR9 and have anti-tumor activity. MGN-1703 has passed the first phase clinical trial; ISS1018, agatolimod and other drugs are in clinical research.

The course of tumor is complicated, the treatment effect of single link is limited, and the composite treatment has obvious advantages. Compared to the activation of a single TLR, the composite TLR activator has a wider range of treatments, a more comprehensive target, and better efficacy. Such as Cadi-05 combined with radiotherapy showed good anti-tumor effect in clinical trials

At present, the treatment of viral infection is mainly IFN-α combined with antiviral drugs. The adverse reactions of this regimen include leukopenia, coagulopathy and anemia. TLR plays an important role in the bio-recognition process of viruses and microorganisms, therefore it’s a potential drug target. TLR agonists are small in dosage and have few adverse effects, and have great advantages in treating bacterial and viral infections. Moreover, many TLR-targeted drugs have the functions of treating infection and tumor, and help to reduce the burden of medication.

R-848 activates TLR7 and TLR8, which can be used to treat HCV and other viral infection. TLR7 agonist ANA773 can also treat HCV infection while treating tumors. TLR4 agonist monophosphoryl lipid A (MPL) is able to induce IFN-β and regulate CD80/86 with low toxicity which is used as a vaccine adjuvant in LPS, component of HBV and human papilloma vaccine.

For viral infections and autoimmune diseases, there is a lack of clinically accurate and effective drugs, and TLR-targeted drugs directly target the upstream targets of infection and immune system, curb the source of disease, bring a glimmer of light to such patients. Allergic reactions usually begin with a stronger T-helper 2 cell (Th2) response, induce cytokines, activate antigen-presenting cells, and then induce Th1 responses. The TLR signal can counteract Th2 response and regulate natural immunity, providing an important target for the treatment of diseases such as allergies and asthma.

According to reports, TLR9 agonist IMO 2134 can indirectly regulate Th1 response, and has been observed in animal models; AVE0675, SAR-2119 alone or in combination have anti-allergic effects, AVE0675 has passed Phase I clinical trial; DIMS0150 can treat corticosteroid-resistant ulcerative colitis. TLR9 targeted therapy is very beneficial for patients who are treated with IFN-β and develop resistance or adverse reactions.

TLR antagonists are immunosuppressive agents that can be used to treat diseases which immune system is abnormally activated, such as sepsis, systemic lupus erythematosus (SLE), and rheumatoid arthritis (RA). The TLR9 antagonist hydroxychloroquine (HCQ) is currently one of the drugs for the treatment of SLE and RA, and it also antagonizes TLR7 and TLR8. The compound inhibitor CPG-52364 antagonizes TLR7, TLR8 and TLR9, and can inhibit natural immune diseases such as SLE (animal experiments). Similar drugs IRS 954, IMO-3100 are also under research. Based on the study of TLR4-MD2-LPS complex, inhibiting the binding of lipid A to TLR4 has become a breakthrough point in the study of TLR4 antagonists. The representative substance eritoran has entered the phase III clinical trial. Structural modifications of lipid A, such as CRX-527, also have therapeutic potential. In addition, AV411 and TLR4 antagonist antibody NI-0101 are also under investigation. Monoclonal antibody OPN-305 and small molecule AP177 can antagonize TLR2 and have immunosuppressive effect; production of TNF-α and IL-6 is reduced in TLR2 gene-deficient mice, and tumor growth is slowed down.

The immune system is an important barrier of the body. In a broad sense, the occurrence and development of most diseases are related to the abnormal function of the immune system. When the body is immune invaded, the activation of TLR is the initial event of the immune response, and the “bad circulation” is formed due to the positive feedback stimulation of the inflammatory mediator. Therefore, treatment with TLR can achieve more infection-related diseases. At present, several TLR-targeted drugs have been applied to the clinic, but many drug studies have been forced to terminate, exposing many questions that need to be answered. For example, the process of TLR signaling is not detailed enough, and the pathological features of the disease itself are not revealed. The structure and function of bioactive molecules need to be understood, the safety of drugs is not high, etc. It requires the unremitting research and joint research of molecular biology, experimental pharmacology and clinical medicine. We believe that the depth study of the mechanism of action of TLR and targeted drugs will eventually help humans overcome immune diseases.