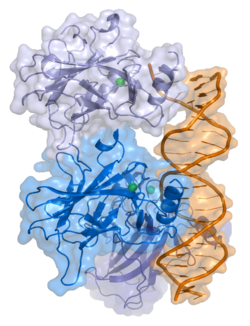 P53 tumor suppressor gene is a kind of gene that inhibits cells from transforming into cancer cells in living organisms. There are oncogene and tumor suppressor gene in the cell already, and so long as one side produces the pathological change and loses the balance, cancer may occur. Human p53 gene, located on chromosome 17 p13, is a nuclear-phosphorylated protein with a full length of 16-20kb and 11 exons. The mRNA, encoding 2.8kb is a p53 protein. Up to now, p53 is the most associated gene with the human tumor. It used to be regarded as an oncogene, until 1989, when the role of oncogene was known to be a mutated p53, and it was later confirmed that wild-type p53 is a tumor suppressor gene. P53 protein, a product of p53 gene expression, is composed of 393 amino acid residues and exists as a tetramer in vivo. The half-life of p53 protein is 20-30 minutes. The Mechanism of P53

Under normal circumstances, the content of p53 protein in cells is very low, because its half-life is short, so it is difficult to detect, but in the growth of value-added cells, can be increased more than 5-100 times. Wild-type p53 protein plays an important role in maintaining the normal growth of cells and inhibiting malignant proliferation, so it is called “gene guardian”. P53 gene constantly monitors the integrity of the cell chromosome DNA. Once the cell chromosome DNA is damaged, p53 protein binds to the corresponding binding site of the gene DNA, acts as a special transcription factor, and activates the transcription of p21 gene. The cells were arrested in G1 phase and inhibit the activity of lyase and interacts with replicator A to participate in the replication and repair of DNA. If the repair fails, the p53 protein starts the process of programmed death (apoptosis) to induce cell suicide, prevent the generation of cancer-prone mutant cells, therefore preventing the malignant transformation of cells.