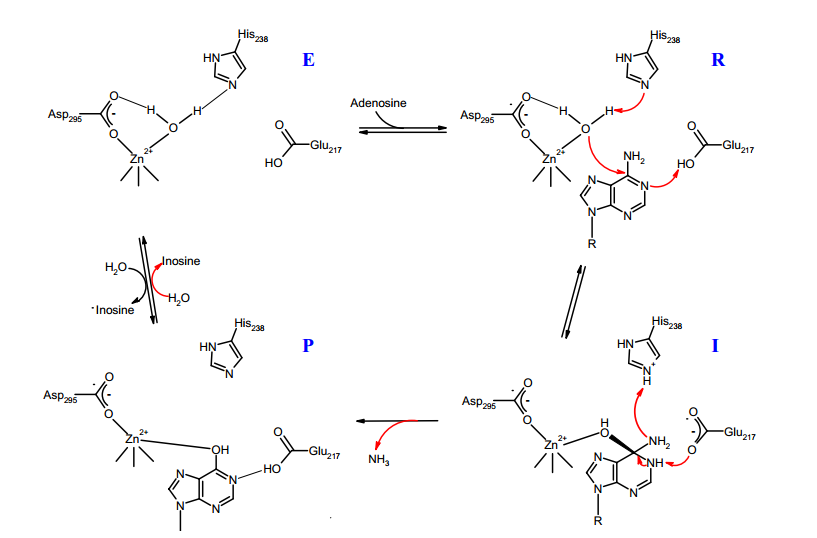 A detailed mechanism of reaction has been proposed based on crystallography and site-directed mutagenesis data obtained for murine adenosine deaminase. The kinetic studies based on solvent isotope effects and measurements with halogen substituents at C6 indicate that the formation of the tetrahedral intermediate is the rate determining step and not the C-N bond breaking for the elimination of ammonia. The kcat for catalysis by murine ADA was measured to be 240 s-1. The proposed mechanism of reaction of adenosine deaminase (ADA) first involves the activation of zinc-bound water to form the hydroxide ion which then acts as a nucleophile attacking the C6 of the substrate to form the tetrahedral intermediate (state I). In this step Glu-217 is proposed to donate the proton to the N1 of the substrate in order to form the intermediate. As mentioned previously, the crystallographic data suggests that the active species during the reaction is the hydroxide and not the water molecule. However, it is unclear which one of these species is present upon the substrate binding, raising the possibility that in the state R instead of zinc-bound water it could be a hydroxide ion.

The identity of the amino acid acting as a general base in the abstraction of the water proton is unclear as well. The site-directed mutagenesis analysis clearly shows that Glu-217 and His-238 are the two catalytically active amino acids, as their substitution produces mutant variants with less then 0.2% of original activity. An interesting result is obtained for ADA where His-238 is mutated to alanine. The crystal structures of this mutant form showed presence of the hydrated PR which was used as a substrate in its unhydrated form. Thus, the substitution of His-238 by alanine does not prevent the hydroxylation of the substrate. Based on this observation it has been concluded that His-238 is not required for the abstraction of the proton from the zincbound water. Nevertheless, the crystal structure of His-238→Ala mutant also reveals a new water molecule located close to the position occupied by His-238 in the native enzyme. It is possible that this second water molecule could be responsible for the catalytic activity of the His-238A mutant. Such a possibility has been explored in a theoretical ab initio study, with results suggesting that the catalytic activity in the mutant enzyme is a result of the combined effect from the second water molecule and an Asp-295 residue, leaving open the possibility that His-238 is indeed the general base in the catalysis. This study however did not consider Glu-217 as a potential general base. The Glu-217 is located further away from the zinc-bound water at 3.8Å, a distance which is not ideal for proton transfer. Thus, it is unclear if the reduction in catalytic activity of Glu-217 mutants could be attributed to its role as a general base. Consequently, these up-to-date experimental and theoretical results do not allow for a definite assignment of the amino acid responsible for water proton abstraction.

In the proposed mechanism, the formation of the tetrahedral intermediate is followed by protonation of the NH2 to form the leaving group and its release from the active site. This is experimentally the least understood part of the mechanism as no representative species has been isolated for this step. Two major mechanisms were proposed to explain the source of the proton used to form the ammonia: in one case the His-238 acts as a proton donor for the leaving group, in the second case the proton comes from the hydroxyl group of the tetrahedral intermediate. The second mechanism implies that either Asp-295 or Glu-217 must facilitate the proton shuttle from one group of the intermediate to another. It is uncertain which one is a more suitable candidate for this purpose: Glu-217 is located far away from the hydroxide group and Asp-295 is involved in zinc coordination which could limit its mobility.

Finally, the active site is recovered after the exchange of the product with solvent water, which completes the catalytic cycle. The reaction mechanism in figure implies that the product is accumulated in the 1,6-hydrate form. It has been argued that this is incorrect on the basis of 13C NMR results for enzyme-bound inosine, which indicated that C6 retains its sp2 hybridization. Regarding the water/product exchange reaction, adenosine deaminase was found to catalyze the exchange of oxygen from H218O into inosine. The mechanism for this exchange was proposed to proceed in a similar fashion as the deamination reaction via formation of tetrahedral intermediate through the attack by H218O at the C6 center.

Some theoretical studies have been carried out on ADA concerning binding modes of adenosine and its analogues to the active site and their potency as inhibitors and only one attempt has been made to study the reaction mechanism. This study focused only on the first step of the reaction, formation of the tetrahedral intermediate, exploring exclusively the roles of His-238 and Asp-295 in the catalysis. Thus, the possibility of Glu-217 acting as general base in the water activation process was not considered. This study was also inconclusive regarding the exact mechanism of formation of hydroxide group bound to zinc and the following nucleophilic attack. This suggests need for a theoretical study of the reaction mechanism of this enzyme.

Anastassiia Moussatova. Theoretical study of hydrolytic deamination by adenosine deaminase and the role of Zn in the catalytic process