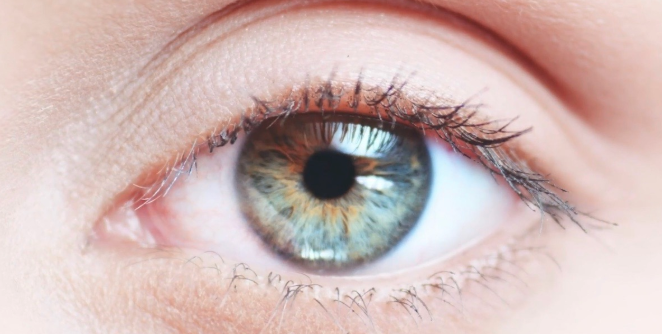 The human eye is an important sense organ, it is capable of receiving visual images which are then carried to the brain, allowing us to interpret shapes, faces, colors, and depth. The eye is incredibly complex and is made of 10 general components, these components all work together to keep our eyes visible. The main components of the eye involve cornea, pupil, iris, lens, vitreous humour, retina and sclera. The cornea is the outermost layer of the eye, and it is mainly responsible for focusing the light into our eyes. The function of pupil (the black circle in the center of the eye) is to monitor the amount of light received by the eye. Specifically, the full light causes the pupil constriction, while the lack of light cause the pupils to dilate, to receive as much light as possible. The iris is the round coloured part of an eye, it played a role in adjusting the size of pupil. The lens is the transparent part of the eye, behind the pupil, which focuses light. The vitreous humour is the transparent gel-like substance that fills the posterior chamber of the eyeball. It helps to keep the eyeball in proper circular shape. The retina, which is a layer of tissue at the back of the eye, is sensitive to light and responsible for sending signals to the brain about what is seen. The sclera is the whitish fibrous membrane (albuginea) that with the cornea forms the outer covering and protection of the eyeball. It can provide strength, structure, and protection for the eye. The human eye is called “camera-type eyes”. The human eye works just like a camera, the eye focus light onto the retina.

Glaucoma is a group of eye diseases that are connected to damage to the optic nerve, which is most often caused by increased intraocular pressure. The increased pressure can affect the optic nerve, which causes vision, in severe cases, can lead to blindness. Two types of glaucoma are common: open-angle and angle-closure glaucoma. There are often no symptoms in the early phases of glaucoma. Some signs and symptoms indicating glaucoma are blurred vision, headaches, sickness and vomiting, multi-coloured halos, and pain in the eyes. Once the vision is affected, the damage is permanent, so early diagnosis and treatment is incredibly important. People with a family history of glaucoma and the elderly are at particularly high risk.

Cataracts are one of the most common eye diseases. With age, the lens loses a lot of its elasticity which often results in cataracts. Since cataracts are more common in people over 65 years of age, they are called as a degenerative eye disease. The symptoms of cataracts encompass cloudy vision, poor night vision, double vision, glare from bright lights. The clear cause of cataracts is unknown, however, it is believed that they are closely related with diabetes, trauma, some medications, excessive UV light exposure and a family history. Cataracts may lead to blindness if left untreated, it is the leading cause of blindness worldwide.

Treatment: The effective treatment for cataracts is surgery using advanced femtosecond laser technology. Surgery is curative. An eye drop may be beneficial in improving cataracts.

Generally conjunctivitis is caused by bacterial or viral infections, or may be due to irritants (chemicals, pollutants, or allergens). It is characterized by redness and inflammation of the clear tissue covering the eye and the inside of the eyelids (conjunctiva). The symptoms of conjunctivitis also include itchiness and watering of the eyes. Conjunctivitis can affect one eye or both eyes.

Treatment – Viral conjunctivitis does not need treatment with antibiotics, some medication may help relieve symptoms. Antibiotic drops or ointments are often helpful for treating bacterial conjunctivitis. For allergic conjunctivitis, antihistamines, such as alcaftadine, Emedastine, Loteprednol, olopatadine, may be used to treat allergy symptoms.

AMD is an eye condition which involves the breakdown of the macula – the middle part of the retina. This results in cell death and progressive deterioration of the vision over time. AMD is classed as two types: wet and dry. As it is age-related, it is most often diagnosed in over 65 age group. AMD affects millions of older adults. Unlike cataracts, poor lifestyle choices such as smoking, a poor diet and obesity can exacerbate AMD. The typical of AMD encompass blurred vision, colour distortion and reduction in vision.

Treatment: there are a broad of treatments to prevent the progression of the disease and protect the vision, like centrasight implantable telescope, oraya therapy, injection therapy. The option depends on the condition.

Other eye diseases include retinal detachment, uveitis, blepharitis, and more.

At BOC Sciences, you can find a wide range of related drug impurities and metabolites to support your research and development.

← What is receptors?
Cardiovascular diseases →