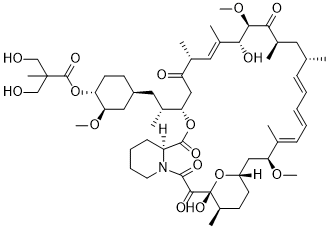 The discovery of temsirolimus mTOR protein, the target of temsirolimus, is a very important protein, which is the center of mammalian metabolic regulation and participates in the physiological activities of a variety of cells and tissues, and plays an extremely important role in cell growth, differentiation, metastasis, and survival. It is a hot target in tumor treatment. Temsirolimus is a semi-synthetic compound from rapamycin. Rapamycin is a natural product isolated from a soil bacterium and has been approved for sale by FDA because of its immunosuppressive effect. mTOR regulates cell differentiation by activating p70S6K1 and 4EBP1 proteins, and after inhibition, cell division stops at G1 and S phases. This indicates that rapamycin and its analogs have potential antitumor activity. Based on this mechanism, rapamycin is used in anti-tumor research, and a series of derivatives are obtained and their antitumor activity is tested.

The clinical trial of temsirolimus